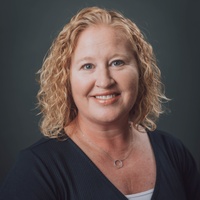 Debi Deal, a native of Lyons, KS, graduated Kansas State University where she earned her Bachelor’s degree in Business Administration/Finance.  Before joining Iron Insurance Partners, she was employed by Regional Mortgage Corporation (Denver) and Kennedy & Coe (Garden City.)  In 2001, she obtained her Series 7 & 63 securities licenses to become a financial planner.  When her company relocated to Wichita in 2003, she chose to stay rooted in Garden City, where she accepted an accounting position with (then) Keller-Leopold Insurance.  Since then, she’s worn several hats including finance, licensing, compliance, IT, and HR.  Debi became a shareholder in 2016 and later became the Agency’s Chief Financial Officer.  She and her husband, Jim have two kids, Oliver and Maggie. She is involved with the Leave a Legacy Foundation, helping to improve cancer care in Western KS and serves on the Executive Committee of the Women of Purpose, an endowed fund managed by the Western Kansas Community Foundation.  In her spare time, Debi enjoys reading, planting (just about anything), traveling and spending time with extended family.